st children know Santa Claus as a big, round, red-cheeked, joyous, old gentleman who delivers Christmas gifts clad in black boots and a red and white suit. But really, who is Santa Claus and where does Santa Claus come from?

The legend of Santa Claus dates all the way back to the 4th century when a child named Nicholas was born. At that time, nobody knew that he was to become world renowned as Santa Claus, but Nicholas soon showed signs of special abilities. 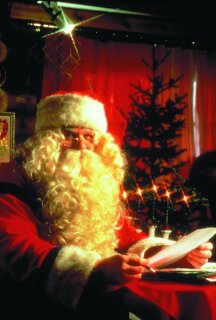 As a grown-up he became bishop of Myra in Lycia, a province of the Byzantine Anatolia, now in Turkey, where, according to legend, he only did good deeds.

One of the deeds later associated with Nicholas as Santa Claus or gift donor took place when he saved a family from poverty one night by throwing money through their window. But Nicholas was capable of much more than that. He could, by the power of God, bring the dead back to life and save sailors from storms. Therefore, Nicholas (later known as Santa Claus) was beatified and initially, was mostly honored by the sailors. 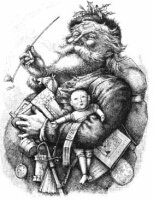 At first, Nicholas became a Catholic saint, but during the Reformation hagiolatry was abandoned by the Protestants. However, it was difficult to just drop St. Nicholas due to his popularity; thus, he was portrayed without a bishop’s miter and was named Santa Claus. Coincidentally, Nicolas had died in December, thus, it was now easy to associate him as Santa Claus with Christmas and gift-giving.
That’s how St. Nicholas became known under the name Santa Claus in Europe and later on, also in the USA. His story was spread by the Dutch sailors berthing in New York. They called St. Nicholas “Sinterklaas”, and through translations to American English, he became the American “Santa Claus”.

Today, Santa Claus is famous all around the world as the kind, old man who brings Christmas gifts to the children. Santa Claus has been widely used as a commercial eye catcher, in particular after 1930, when Coca Cola used him in their advertisements for the first time. Here he had a big, white beard, black boots, a big red coat, and an infectious laughter – exactly like we know and love him today.

However, discussions about his origins continue. St. Nicholas came from Asia, but today he is associated with snow and Christmas; therefore, countries like Canada, Finland, Greenland, Norway, and Sweden are fighting for the right to house the old gift giver.

Santa has 31 hours of Christmas to work with, thanks to the different time zones and the rotation of the earth.

In Poland, Santa Claus gives gifts on the 6th of December.

In 1866, the artist, Thomas Nast, made a montage entitled, “Santa Claus and His Works” and for the first time established Santa as a maker of toys

It was Coca-Cola’s magazine advertisements, billboards, and point-of-sale store displays that exposed nearly everyone in America to the modern Santa Claus image.