Will It Snow for Christmas?

We love christmas snow. For many of us a White Christmas would be very similar to the scenes depicted on traditional Christmas cards or as described in Charles Dicken’s “A Christmas Carol”. Ideally it would snow heavily, between midnight and midday on the 25th of December.

To change region. Press the edit link on the widget close to “New York”

Probability of a White Christmas in US 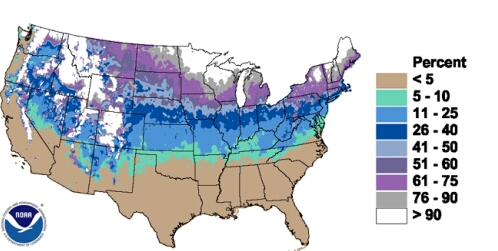 This is from NOOA (National Environmental Satellite, Data and Information Service) :

“Generally, the greatest probabilities of christmas snow-fall lie where they would be expected– over the northern U.S. and in mountainous areas. In defining a ‘white Christmas’ as having a snow depth of at least 1 inch, the chances are 60% or better over an area including much of the northern Rockies, the northern Great Plains, the Great Lakes area, and most of New England. The chances are less than 20% over most of the southern third of the country excluding the Rockies, along with the Pacific coast”.

Probability of a White Christmas in UK

Christmas Snow-fall can occur in England any time from November to April, but it is impossible to predict at long range due to the unseasonable nature of the climate, it being dominated by a vast source of warm, moist air from the Atlantic, the spin of the Earth guaranteeing that in general winds are brought in from that direction. On occasion these winds weaken and that allows winds from a cold north through to southeasterly direction to affect us.

The probability of a white Christmas was greatest during the 30 years 1782-1811, when snow on two or three days during Christmas (24th to 26th December) occurred on an average of about one year in four, and includes the cold December’s mentioned above. It is also noteworthy, in the context of this note, that the 30 yr period does show a high incidence of with 2 or 3 days with snow falling over the Christmas period: 4 out of 30 occasions being the second highest such total in the series after that of 1782-1811. 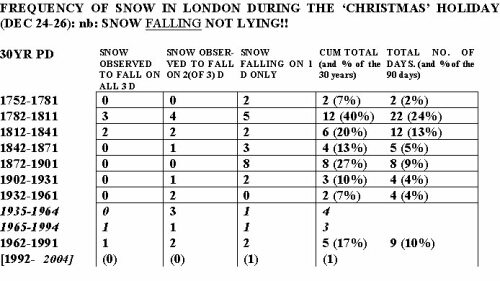