The children always look forward to receiving gifts, while grown-ups probably look forward to preparing and eating Christmas food the most. As it is, we all exert much effort to plan and prepare good food during Christmas. All recipes must be tasty and there must be enough of everything.

During Christmas, a whole nation eats the same food. People cook according to the same Christmas recipes and end up with the same table decorations. It is, after all, a time for observing traditions. In the USA, they serve turkey and/or ham. It is placed in the middle of table; thus, it also functions as an amazing table decor. Many people in England do the same. 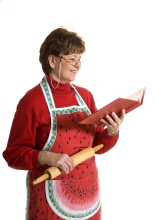 However, even though traditions with regards to Christmas recipes are great, they are not the same across States.

Scrumptious Cookies
Delicious delights to make for family and friends.

Soups & Stews
Warm your kitchen and your family with these
wonderful recipes.

At the same time, each family often has its own personal Christmas recipe which all members prefer. Sometimes, the turkey is stuffed with something very special or the potatoes need to be prepared in a special way on this particular day.

You will see the big differences if you examine what the different nations eat for Xmas. In Mexico, the menu mostly consists of fruits, nuts, and salad. In the Czech Republic, they eat carp, and in France, the Christmas recipes consist of both foie gras and lobster.

Christmas food is about more than just the hot main dish. Besides the savory dish, Christmas recipes include lots of cakes, pies, sugar, and candy are also important.

The 1796 book, ”American Cookery”, considered to be America’s first cookbook, shows that Americans have had a sweet tooth for a long time. One of the holidat recipes goes like this:

Christmas Cookey
“To three pound of flour, sprinkle a tea cup of fine powdered coriander seed, rub in one pound of butter, and one and a half pound sugar, dissolve one tea spoonful of pearlash [a rising agent] in a tea cup of milk, kneed all together well, roll three quarters of an inch thick, and cut or stamp into shape and slice you please, bake slowly fifteen or twenty minutes; tho’ hard and dry at first, if put in an earthen pot, and dry cellar, or damp room, they will be finer, softer and better when six months old.”

Scrumptious Cookies
Delicious delights to make for family and friends.

Soups & Stews
Warm your kitchen and your family with these
wonderful recipes.

Did you know that….

America’s first recipe for Christmas cakes dates back to 1796.

In Australia, the turkey is eaten cold.

In the old times, sugar was very expensive; therefore, Christmas cakes were a luxury.

In Denmark, they put hot porridge outside for the pixies on Christmas Eve.

The first gingerbread man is credited to the court of Queen Elizabeth I, who favored important visitors with charming gingerbread likenesses of themselves.