The Magic of Old Christmas Carols

The old Christmas carols embody the ideals of truly Christmas-themed songs and espouse the sacredness and joyousness of the season of the Nativity. The ideal Christmas song welcomes with harmony in the very air the birth of the Christ child. Christmas carols which used to be part of church services now become part of the religious traditions as practiced in society in the community. 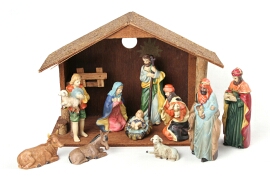 There may be pagan roots in the very word carol which may be derived from the French caroller which means dancing around in a circle or from the Greek dance which was accompanied by flute music and referred to as choraulein. This dancing may be part of old magical rituals which may be a reason why the English Protestants under Oliver Cromwell banned the practice of old Christmas carols and nearly decimated the practice. The practice became Christianized with the acts of charity that come with caroling and gift-giving.
[ads location=”page_2″]

The more recent practices surrounding Santa Claus may be irrelevant to old Christmas carols. This context may be part of the tunes and ditties spread by wandering minstrels in the Medieval Ages in Europe which include particular repertoires for Christmastime. Another possible source for old Christmas carols that is popular among the masses and without or with less religious overtones are the songs of the watchmen in the wee hours of the winter nights while they patrol around the streets of medieval walled cities. The spirit of charity and gift-giving in modern practices bridge the modern practices with the older traditions. Christmas carols are not such only because they are joyful and merry. They fill the air with initiating energies of Christianity and spirituality.
The tradition of old Christmas carols dictate that they should adhere to the Book of Luke in the New Testament. This is no longer followed at the present except for the old hymns of the Christmastime litanies or musical prayers.
[ads location=”page_3″]
Related:
[links category_name=”gift2″]