When people back in the old days talked about Christmas lights, they meant the small, white candles on their trees. But today, people would undoubtedly visualize the chaos of electric lights in many colors. No country in world cares as much about Xmas lights as the USA.

It all started with Edward H. Johnson, who was employed by Thomas Edison, as an inventor. During the months running up to Christmas in 1882, he created 80 red, white, and blue electrical light bulbs. When Christmas came, he proudly presented a glimmering Christmas tree to the gawking public.

As early as 1895, the first electrical lights were lit on the Christmas tree in the White House, and today, Christmas has become a season for lightning balls, stars, angels, and pixies in many countries.

Many people actually try to exceed each other in designing Christmas light decorations. Some houses even stand out by looking like airport terminals during Christmas.

Even though many people might think that it’s too much to put so many lights all over their houses and gardens, one can hardly avoid Christmas lights if one wants to have a beautiful Christmas. In fact, in the later years, decoration using Christmas lights have become “events” that gather the whole neighborhood. Check out the study, “Christmas Lights and Community Building in America”.

The most popular Christmas lights are either the old-fashioned incandescent light bulbs or the modern LED. The so called Bubble lights are one of the most amusing ways to dress up one’s holiday

How to decorate your house with Christmas lights

It is not difficult to install Christmas lights around your house, but there are still a few things worth keeping in mind. Here is a list of good pieces of advice.

• 1. First, make a thorough check of your Christmas lights. There should not be any breaches on the lead or fuses, since any breach could cause a fire.

• 2. Decide on the location of the electrical socket. There are rarely any sockets available in ceiling height, so most likely you will have to drape an extension cord from the floor and out of a window. If you want to avoid having to keep a window open during Christmas, you should drill a small hole through the wall. 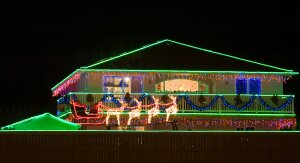 • 4. Now drape the cable so that you begin with the plug and continue out and along the many holders. They should fasten the cable tightly as you proceed. If you don’t fasten the cable on all of the holders, the cable might loosen due to the wind or your pets.

5. Keep energy consumption in mind. Use Christmas lights to decorate your house only during special occasions.

An electrically lighted tree was a status symbol in the early 1900s.

Early decorators spent a lot of time making sure that lamps were positioned upright on the tree, because of the thought that the position would make the lamp bulb last longer. It is not true, of course.

The small “midget” bulbs commonly known as fairy lights are also called Italian lights in some parts of the U.S

The “Tacky Xmas Decoration Contest and Grand Highly Illuminated House Tour” started in Virginia in 1986. Today you can find similar contests all over the world.