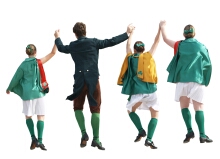 Another famous Irish traditional Christmas carol goes by the name of Once in Royal David’s City. This Irish traditional Christmas melody was written and performed by then popular songwriter and singer Cecil Frances Humphreys Alexander, and this single was recorded during the early 1850s. The musical arrangements for the songs in this album release were done by then famous musical choreographer Henry John Gantlet.
[ads location=”page_2″]

One of the most famous Irish traditional Christmas melodies has been widely controversial around the world due to certain translations of various Christian and non-Catholic groups. The Christmas melody, known as 12 Days of Christmas, had been translated many times by various practitioners of Christianity, and this led to the song being taught to kids at the time wherein Catholicism was actually banned.
[ads location=”page_3″]
Related:
[links category_name=”gift2″]