The Origin and History of Christmas

To truly learn the History of Christmas, you must first realize that Christmas is a celebration for many different cultures, therefore it has its origin deeply rooted in many different cultures and traditions. The name itself comes from From the Old English ‘Cristes Mæsse’ ~ meaning the ‘mass of Christ’ ~ for Christians – the history of Christmas begins with the birth of a babe in Bethlehem.

The celebrations and traditions of modern ‘Christmastime’ are a mix of Pre-Christian, Christian, and even secular themes. Popular modern traditions of gift giving, decorations, music, feasting and other festivities are something that are continued by billions of people annually.

History of Christmas as the Solstice, origin of December 25th.

Prior to Christian influences, Romans celebrated a winter holiday known as Solstice – to mark the shortest day of the year. Historical Germanic people also celebrated, and in some cultures continue to celebrate, Yule on this date. For Christians, it is believed that Christ was born on the 25th, although the exact month is unknown. December was likely chosen to celebrate so the Catholic Church could compete with rival pagan rituals held at that time of year and because of its closeness with the winter solstice in the Northern hemisphere, a traditional time of celebration among many ancient cultures. Many of what we consider to be common Christmas traditions started as these celebrations such as singing, feasting and drinking.

Christmas History in the Middle Ages

Although other, more important religious holidays were practised by Catholics and Christians during this time, Christmastime was still a special event – and especially the days surrounding  Epiphany (the date on which the Magi visited Jesus), and gift-giving became more popular. Feasts and festivals flourished among Monarchies in the middle ages as great feasts and pagents were put on by the Kings of England until 1607. Christmas history then takes a dark turn;

English Reformation and The Ban on Christmas!

While not official, the current ‘War on Christmas’ has nothing on the actual Puritan ban and deeming of ‘Sacrilege’ in the 1600’s. While the newer Anglican and Lutheran religions, and other European (mainly Catholic) countries continued to celebrate, although under more religious and less raucous tones. After the English Civil War and Puritan rule, Christmas was banned starting in 1647 and continued till the Monarchy’s restoration in 1660. During this time, there was much unrest and protests were common around Christmastime for those who wanted to keep the Tradition alive.

Overseas, Puritans who had colonised America were radically against Christmas celebrations, and the ban in the New World continued until 1681.

All of the unrest left the observance of Christmas to lay low in England, and after the American Revolution it became less practised in America as it was seen as a “British Custom”.

For many, the ideal Christmas is of the Victorian Era, slowly Christmas traditions were being re-introduced to English and American homes. The epitome of this was shown in the publication of Charles Dicken’s ‘A Christmas Carol‘ which instantly became a classic – and is credited with popularizing the phrase ‘Merry Christmas’.

Traditions were being incorporated from other cultures, including decorating an Evergreen, and by the 1870s it was common practise to have a Christmas Tree in the home. Even Queen Victoria shared drawings of her Christmas Tree as it was decorated in Windsor Castle in 1848.

The 1800s also so the introduction of “A Visit from St. Nicholas” (commonly known as ‘Twas the Night before Christmas), the start of commercially produced Christmas Cards, and the revival of Christmas Carols that we still sing today.

History of Christmas into Modern Times

Much of how we celebrate Christmas has to do with our nostalgia for Christmas’s past. Christmas was becoming a more commonplace observance in middle and lower-class families as governments started issuing public holidays for celebrations. It wasn’t until after World War II, and into the 1950s that Christmas rituals were commonplace in every household, radio and television made sharing holiday spirit easier, and our celebration of the Most Wonderful Time of the Year has continued to grow ever since.

Is there something else exciting about Christmas History you want to share? Join us on the Forum or comment below! 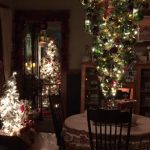 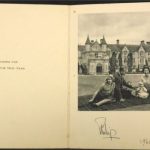 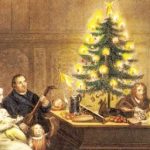