One of the absolute best parts of the Holiday Season is spending time with friends and family. If you’re stuck for ideas on how to fill the time when you have neighbours visiting, or simply want a screen-free evening with the family, there’s no better way than to pull out some card games (and no, we’re not talking Crazy 8s here, something that not just grandmas will enjoy!)

This December we have big plans for hosting some festive gatherings at my house. We have friends coming over from Canada, we have a Christmas Party planned, and we also have lots of fun family time pencilled in – and I can’t wait to play some of the awesome party card games from Ginger Fox we were sent (gifts, in exchange for review, contains affiliate links).

One-Day Giveaway  on our Facebook for Super Slow Sloths by Ginger Fox! 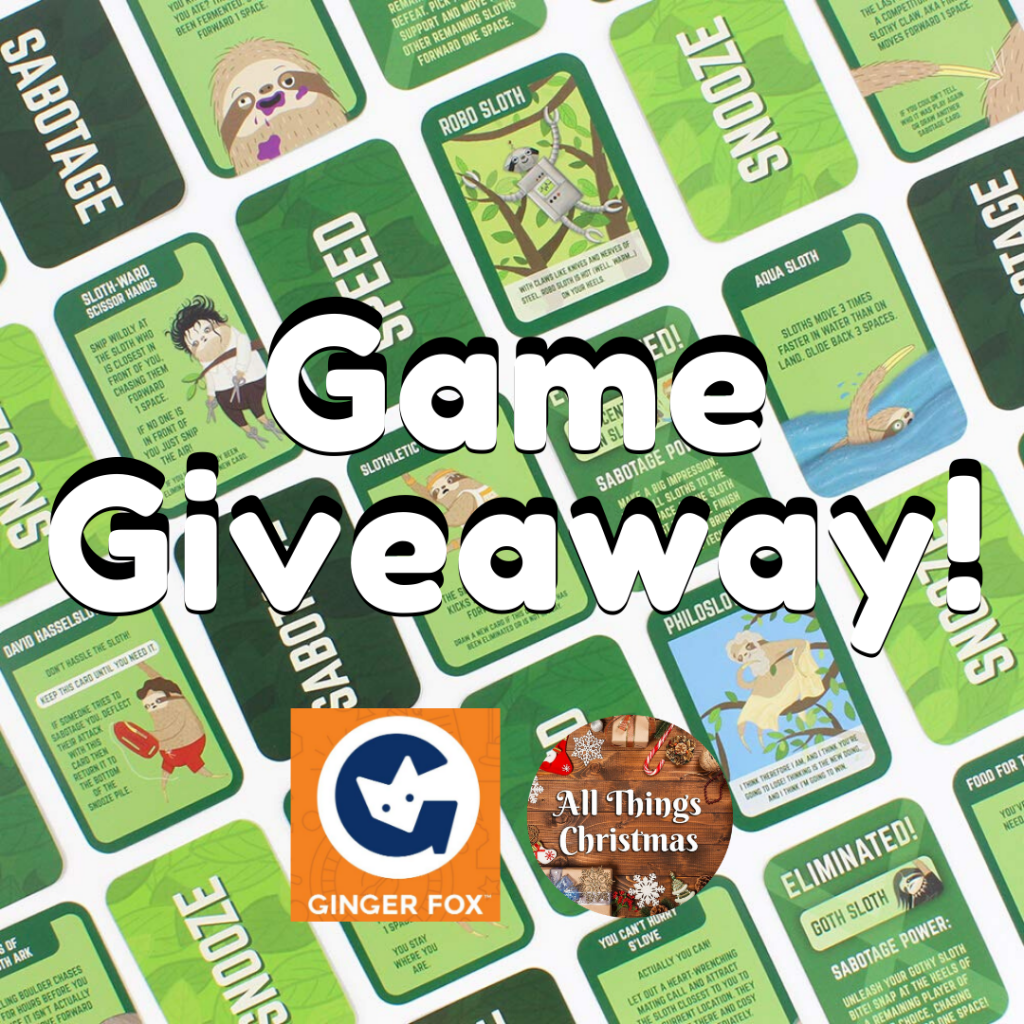 Although we are also big Board Game fans, sometimes you just want a simple card game to play, or to spice up a party. Here are a few of the games we were sent, and a peek at some of our favourites within the bunch. 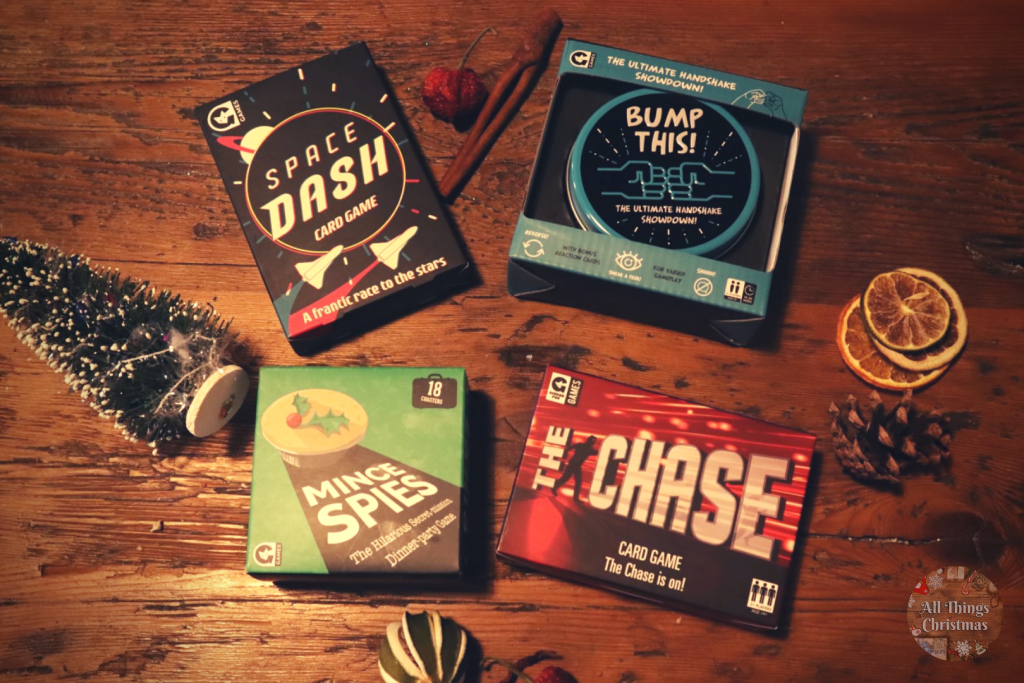 First on the list is Space Dash. This fast-paced card game is like version of Versus Solitaire, where you’re trying to blast off (with your own countdown series) before anyone else, while the cards on the table keep changing and moving. It’s a clever game, that’s probably based on a more traditional card game that I am unaware of. This one is probably for the older kids and adults as it can get a bit frantic. 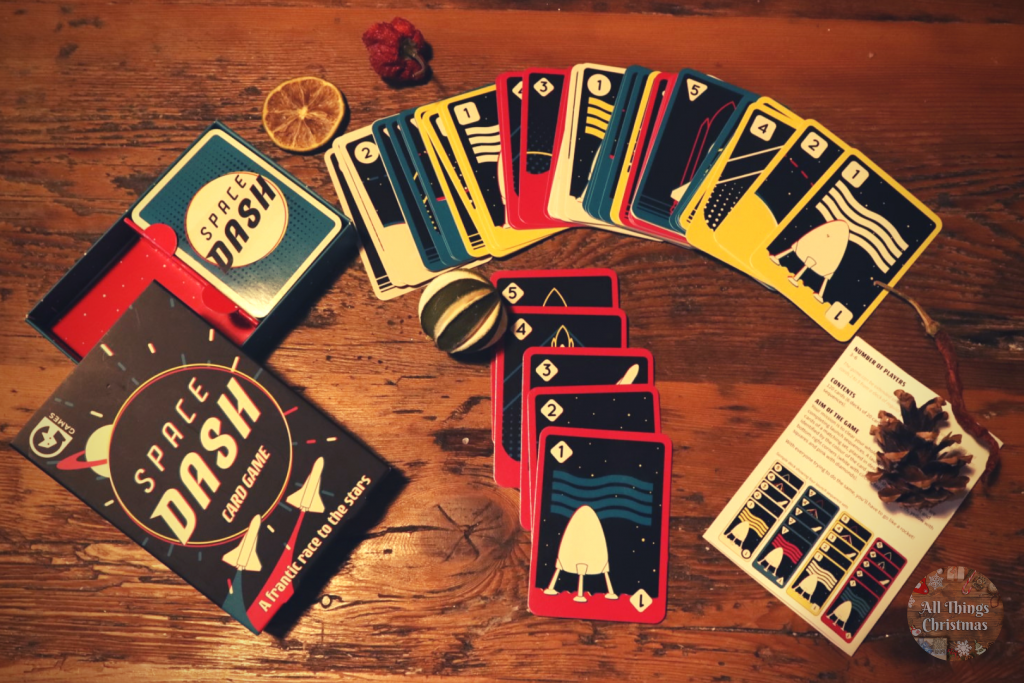 If there’s one thing that I dislike about Holiday Shopping (and there really is just the one thing), it’s trying to find Stocking Stuffers for my husband. He is IMPOSSIBLE to buy for because he’s very critical of ‘little pieces of junk’ which pretty much makes up 90% of all ‘Stocking Stuffer’ options at most stores. Not so with this one – I know he’ll be relieved when he sees this one! 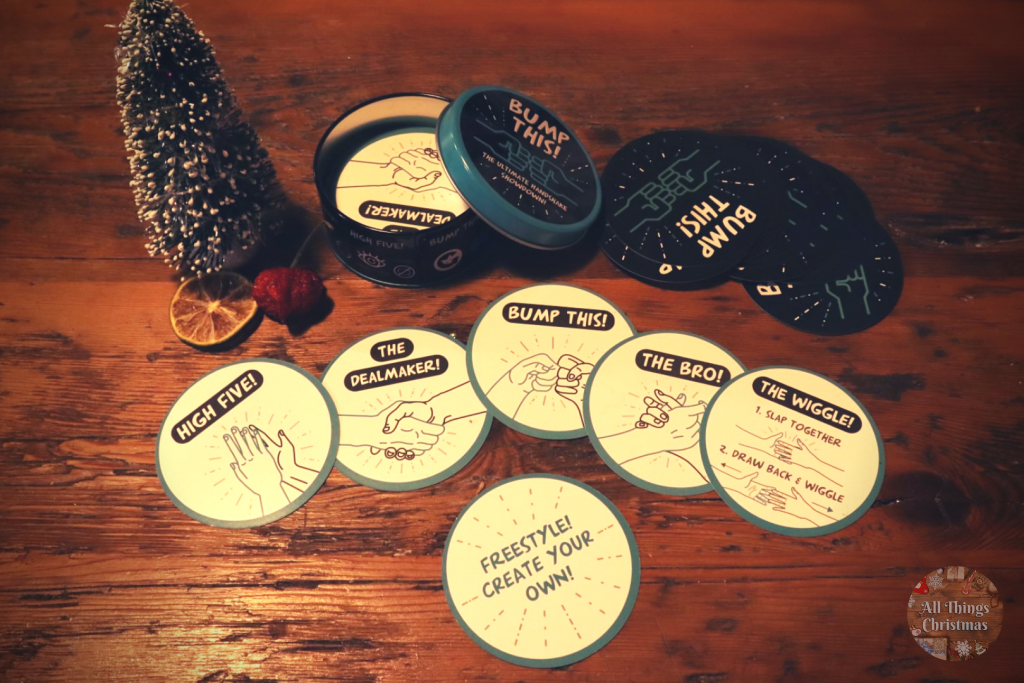 The best way to describe Bump This is like the Handshake version of that ‘Telephone’ game. You know, the one where a message starts at one person and travels from person to person until you end up with ‘Purple Monkey Dishwasher’. Except, it’s handshakes, high-fives and fist bumps. It progressively gets more complicated (especially when you throw in Freestyle moves) and the first person in the chain to get it wrong loses. This is a fun one to play with younger kids, if you go at a slower pace.

Also, this game travels really well. Would be easy to play at a restaurant, or take to another person’s party. Long queue at the Santa Grotto? Grab a few other patrons and get to know them with your new secret handshakes! 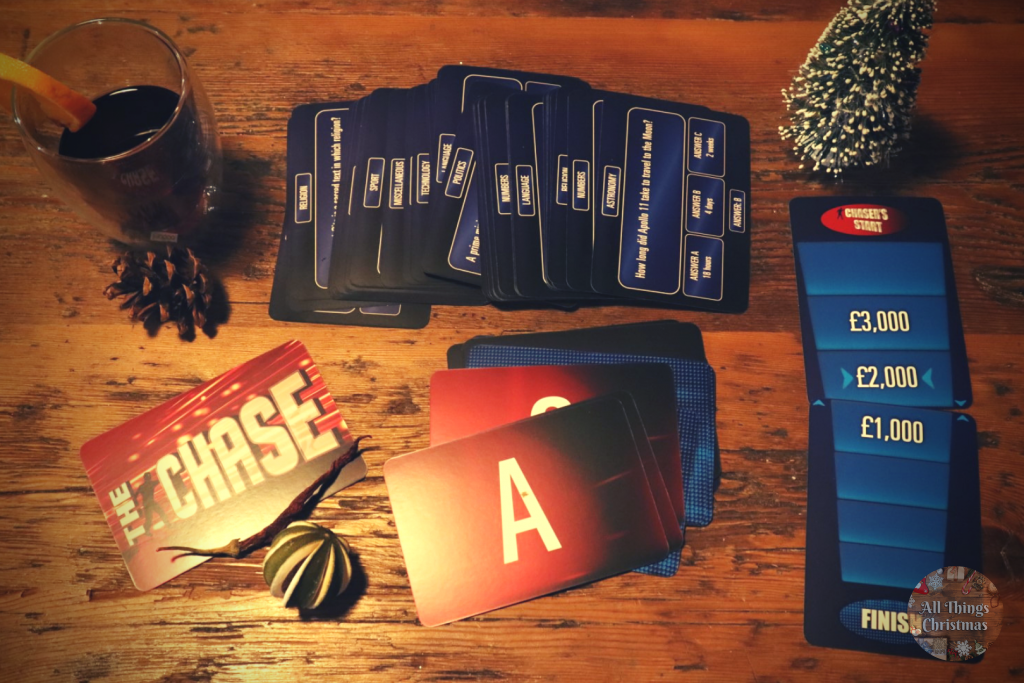 Instead of sitting around watching Game Shows this Christmas (even if that’s your family’s tradition), why not play one yourself! The Chase is on, with the officially licenced Card Game version of this super popular quiz show game. Split into groups or teams, or just play against the Chaser. Following pretty much the same rules of the namesake show, there’s a wide range of topics within the question cards, and even the familiar money board (rules were unclear about actual payouts  – I doubt you should actually fight your family for cash). 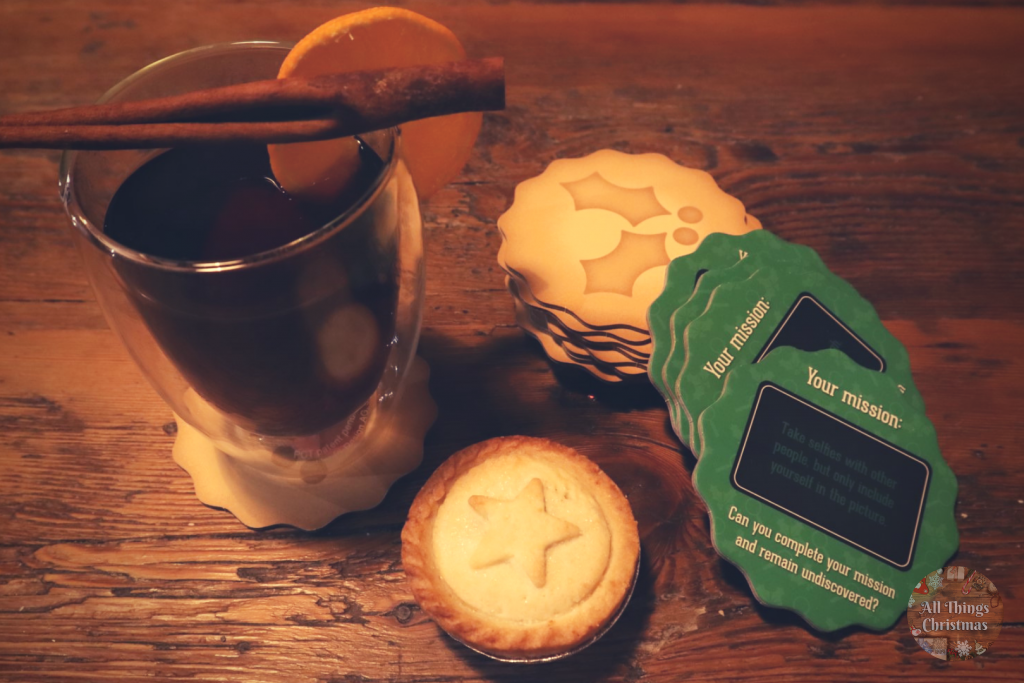 Finally, I’ve saved my top pic for last. This clever dinner party game is so much fun, I can’t wait to play it with our friends from out of town. If you’re looking to take your boring sit-down dinner to the next level, I couldn’t recommend Mince Spies more.

It’s fun, it’s festive, it’s quirky, and it’s sure to have everyone involved (especially kids, if they can keep their mission secret!). These clever little coasters are actually Secret Missions. Randomly assigned, you need to complete your mission before the end of the party (or any time-frame the host provides). Some of the missions are a bit embarrassing, but most are innocent and fun. Try to stay undercover, and not get found-out before the end of the game. 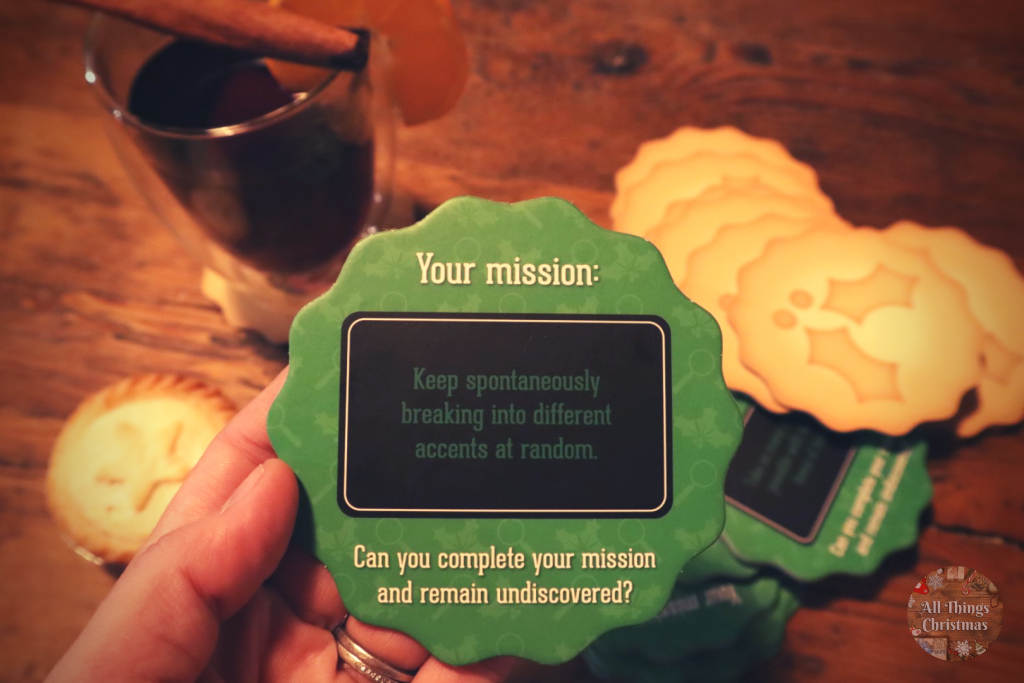 Obviously this one is Christmas themed, but that is not the reason it’s my favourite – it’s just good clean fun for the whole family. Similar to Bump This, you could even take this one on the road.

What are some of your favourite games to play over the holidays with your friends and family? Share some photos even, join our Facebook Group to celebrate Christmas within our wonderful Christmas Community. 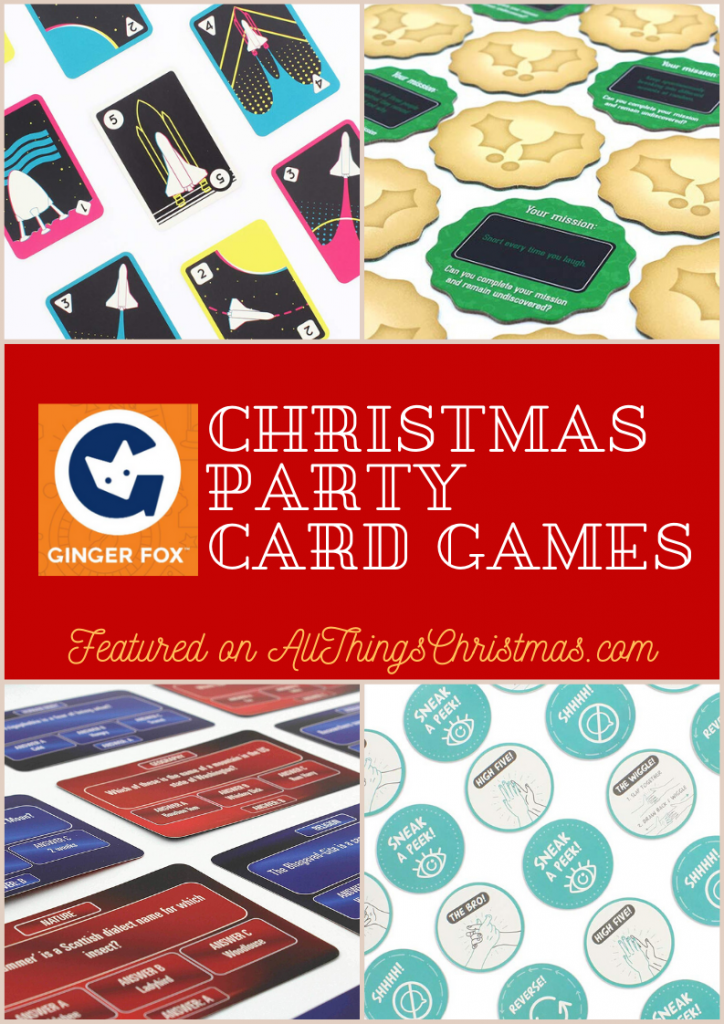 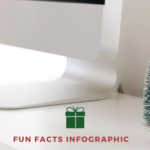 Fun Facts about Co-Working Spaces and the Holidays 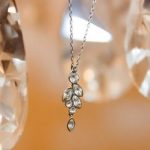 Winter Wonderland Style: What to Wear to a Christmas Party